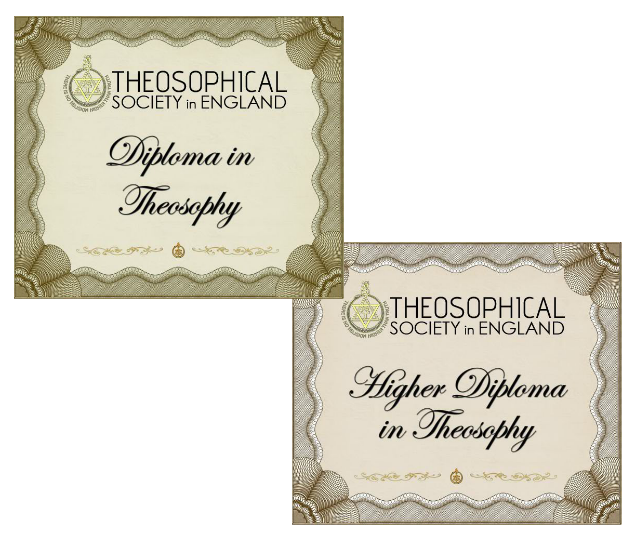 The Diploma and
Higher Diploma in Theosophy

These online open-learning course by the Theosophical Society in England, are designed to assist students' understanding of the basic Principles of Theosophy and of the Ageless Wisdom.

more information and to apply...

The Theosophical Society was formed in 1875 to promote an understanding of Esoteric Teachings.

These teachings, sometimes called ‘The Ageless Wisdom’, which was previously only available to initiates in Secret Orders has found expression down the ages in philosophies, sciences, mysticism, religions and the arts.

The Theosophical Society, now active in over 50 countries, is composed of people belonging to any belief system or to none, who have an aspiration for truth.

Central to the concerns of Theosophy is the desire to promote understanding and brotherhood among people of all races, creeds and philosophies. Devotion to truth, love for all living beings and commitment to a life of altruism marks the true Theosophical Path.

The Aims of the Theosophical Society are:
To form a nucleus of the Universal Brotherhood of Humanity, without distinction of race, creed, sex, caste or color.

To encourage the study of Comparative Religion, Philosophy and Science.

To investigate unexplained laws of Nature and the powers latent in man.

The Theosophical Society in England
The aims of the T. S. in England (registered charity) are to promote moral and spiritual welfare, and the advancement of education, through the promotion and study of Theosophy, and the dissemination of the results of such study to the public.

The emblem of the Theosophical Society is composed of several ancient sacred symbols, and a summary of their meanings is given here, on the TS Adyar website.

It is a symbolic representation of the truth behind and within many traditions.

We welcome anyone over the age of 10 years who is in sympathy with and Accepts the Three Objects of the Theosophical Society. Young people under the age of Eighteen must have permission from their parent or Guardian.